A powder flask is a small container for gunpowder, which was an essential part of shooting equipment with muzzleloading guns, before pre-made paper cartridges became standard in the 19th century. They range from very elaborately decorated works of art to early forms of consumer packaging, and are widely collected. Many were standardized military issue, but the most decorative were generally used for sporting shooting.

Sort by:
Best sellers Relevance Name, A to Z Name, Z to A Price, low to high Price, high to low
Showing 1-1 of 1 item(s) 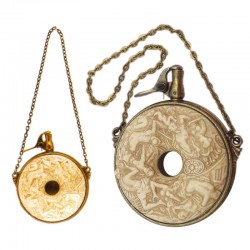