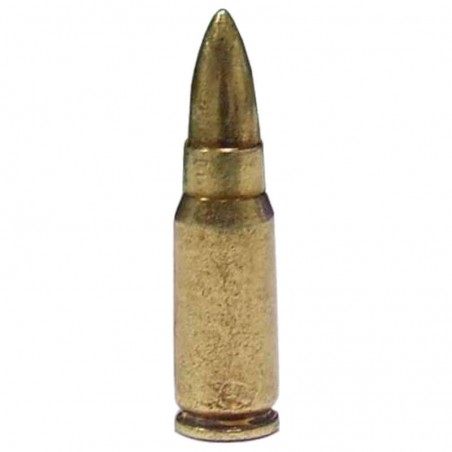 The MP43, MP44 and Stg-44 were almost identical gun names with only production differences and dates. The Stg-44 was called Sturmgewehr (literally assault rifle) and combined the characteristics of submachine guns and automatic rifles. The assault rifle translation has become very popular to describe these types of weapons.
It used the 7.92 x 33 Kurz cartridge, a shorter version than the standard 7.92 x 57 of the rifles that, in combination with its design, allowed it to be used as a submachine gun in closed places, but with greater accuracy and range of submachine guns over long distances. However, it had less range and power than the rifles of the time.
The 7.92 × 33 mm Kurz is an assault rifle cartridge with a flanged capless bushing, developed in Nazi Germany before and during World War II. It is also called 7.92mm Kurz (Short, in German), 7.92 Kurz or 7.92mm K or 8 x 33 Polte. It was specifically designed for the development of an automatic carbine (assault rifle). The cartridge was developed as a compromise between the 7.92 x 57 Mauser rifle cartridge and the 9 x 19 Parabellum gun cartridge, being known as an intermediate cartridge (Mittelpatrone, in German). 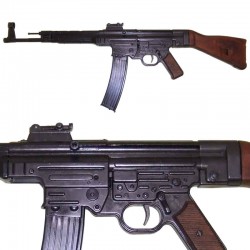